You are here: Home / Documentation / U401 USB Interface

The U401 is a USB solution that is pre-built, pre-programmed, and pre-tested and will get you interfacing your PC (Win⁄Linux) or Mac (OSX) to various devices in very little time! There is no USB device assembly, no driver development, and no firmware to write. In many cases, the U401 can be plugged into an experimenter’s breadboard and circuit interfacing can begin immediately. Demo software applications can be used “right out of the box”.

Newest U401 (Rev 3) front view. This newest U401 has a lightweight and removable USB cable. 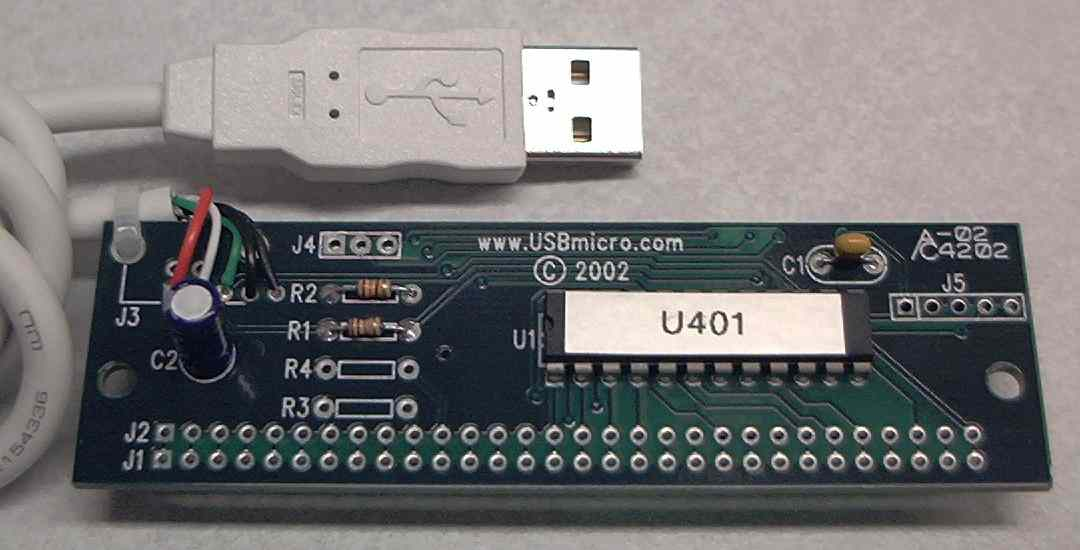 Please see the FAQ for differences in the components used in the pictures.

Features of the U401 USB Interface

Overview of the U401 USB Interface

The U401 provides a simple digital i⁄o interface for the PC (Win⁄Linux) or Mac (OSX). Sixteen i⁄o lines from the microcontroller are provided. Commands can be sent to the U401 that change the i⁄o lines from input to output. I⁄O lines can be individually selected as inputs or outputs. The U401 supports commands to read the ports, and if the ports are set to output, to write to the ports.

The U401 is an interface to SPI (Serial Peripheral Interface) devices. SPI is a local synchronous serial bus that uses a clock line, two data lines, and a device select line for communication between a serial device and a host microcontroller. The firmware on the U401 provides generic access for reading and writing SPI devices. The SPI clock rate can be adjusted to 62.5 kHz, 500 kHz, 1 MHz, or 2 MHz. Because additional pins are available as generic i⁄o, the U401 can use these lines as slave select lines and address multiple SPI devices.

The U401 is a convenient way to interface a standard Hitachi-type of intelligent LCD controller to USB. The commands that support communication to the LCD module are the “standard” LCD commands. Standard commands include writing characters to the display and controlling the display.

The U401 is an assembled and tested circuit card that is 3.5 inches (88.9mm) long and 1.0 inches (25.4mm) wide. This is the same size as a “One Inch SimmStick”. Although the U401 is not a SIMM card and will not fit into a SIMM socket, the card can still be used as a host to SimmSticks or can be used as a SimmStick when not using the SIMM sockets.

The U401 is SimmStick Compatible, the PCB has compatible dimensions and connector layout as a SimmStick. The U401 uses a compatible SimmStick bus layout. There are no square pads (not meant to fit in the SIMM socket), but the spacing for that connector is still maintained. See the ODN Application section, App5: SimmSticks, for examples of using the U401 with SimmSticks.

The U401 interfaces to the PC (Win⁄Linux) or Mac (OSX) via the USB port. An application on the PC (Win⁄Linux) or Mac (OSX) controls the U401. The U401 does not use any custom drivers, just the drivers that are a part of the operating system. Custom software can be developed to use the U401, or the applications that have been created as examples here can also be used.

Uses for the U401 USB Interface

With the U401 you can utilize the USB port on your computer to interface with various electronic devices, such as lights, LCD displays, SPI analog and memory devices, switches, relays, tethered robots, model railroad control, and many custom circuits.

See the ODN U4x1 Application Notes section for examples of using the U401.

Product suitability for your particular purpose⁄use

We have made every attempt to prepare information about the products we carry so that you, as a customer, can make an informed decision to purchase or not. It is entirely at your discretion to make this decision and we do not guarantee that a product will be suitable for any particular purpose.

Open all | Close all